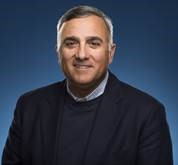 Cocktails and a discussion with Michael Angelakis, the Chairman & CEO of Atairos, a newly-formed $4.1 billion strategic investment company!

- Hear about a career that spans being CEO of two cable companies, Managing Director for Providence Equity Partners ($45 billion AUM private equity firm), the Vice Chairman and Chief Financial Officer for Comcast, and most recently founder of Atairos, a unique strategic investment company.

- Anecdotes about Comcast’s acquisition of NBC Universal, in which Michael lead the negotiations, and outlook on the cable industry and cord cutting trend.

- Thoughts on starting a business in today’s economic environment.

- Michael’s role as the new Chairman of the Board for the Federal Reserve Bank of Philadelphia.

Michael is the Chairman and CEO of Atairos, a New York and Philadelphia-based strategic investment company he recently founded with $4.1 billion in initial equity funding. In addition to leading Atairos, Michael is a Senior Advisor to the Executive Management Committee of Comcast Corporation, where, prior to founding Atairos, he served as the company’s Vice Chairman and Chief Financial Officer. In those roles, Michael was responsible for all corporate development, strategic planning, investor relations, venture capital, corporate reporting, taxation and internal audit, and several other financial, administrative and oversight responsibilities. Since joining Comcast in 2007, Michael was recognized by Institutional Investor magazine as one of America’s Best Chief Financial Officers six out of eight years.

Prior to joining Comcast, Michael served as Managing Director and a member of the Management and Investment Committees of Providence Equity Partners, one of the leading private equity firms investing in technology, media and communications companies around the world. Before joining Providence Equity Partners, Michael was Chief Executive Officer of State Cable TV Corporation and Aurora Telecommunications. He also served as Vice President at Manufacturers Hanover Trust Company in New York, where he oversaw one of the bank’s media and communications portfolios. Additionally, Michael spent several years in London developing Manufacturers Hanover’s acquisition finance and merchant banking activities throughout Western Europe.

Michael is a graduate of Babson College and the Owner/President Management Program at the Harvard Business School. He is the Chairman of the Board for the Federal Reserve Bank of Philadelphia, is a member of the Board of Directors of Hewlett Packard Enterprises and Duke Energy Corporation, and is also a trustee of Babson College.

Stephen has spent his entire 25-year career working in financial markets in London and New York.  He joined the Investment Management Division of Goldman, Sachs & Co. in 2015.   As an advisor at Goldman Sachs, Stephen helps executives, entrepreneurs, wealthy families, and foundations and endowments manage all items of economic impact to their balance sheet and mission.   Prior to joining Goldman Sachs, he advised some of the world’s most sophisticated investors including pension funds, sovereign wealth funds, and global financial institutions as a Partner and US CEO at Brevan Howard, Head of the New York office at Winton Capital, and Managing Director at Credit Suisse Asset Management.   Prior to this, Stephen worked as a Managing Director in Fixed Income Sales and Trading at JPMorgan, and in Mergers and Acquisitions.   Stephen holds an MBA from Harvard Business School and a Bachelor's Degree in Economics from Columbia University.  He has served on several public company and non-profit boards, is a member of YPO-WPO (Young/World Presidents’ Organization).