Cocktail Hour and Dinner at Fork Restaurant with a talk from Fork owner and Wharton Alumni, Ellen Yin on 9/21/16 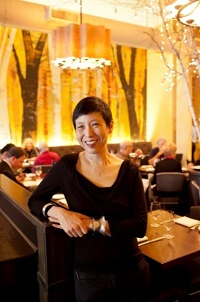 Please join Wharton Alumni Ellen Yin for a talk about her development of Fork Restaurant and High Street Hospitality Group. She will explain how her vision evolved in response to the ever changing environment in which she operates.

SCROLL DOWN TO PURCHASE TICKETS

Restaurateur Ellen Yin
Ellen Yin is the founder and co-owner of High Street Hospitality Group (HSHG), which operates three of the most noteworthy restaurants and bars in Philadelphia:  Fork, at the top of Philadelphia’s must-visit list for nearly 20 years;  High Street on Market, a much-lauded breakfast-through-late-night, ingredient-driven restaurant and bakery;  and a.kitchen + a.bar at the AKA Rittenhouse Square, a dynamic and popular restaurant and bar frequently honored for their exceptional cooking and wine program. At the end of 2015, HSHG debuted their first outpost outside of Philadelphia, High Street on Hudson, in Manhattan’s West Village.

Yin’s attention to detail has kept her flagship restaurant, Fork, among Philadelphia’s most popular and enduring restaurants, and there and elsewhere, her team has amassed an incredible wealth of critical praise. All three properties have earned consecutive “Three Bells: Excellent” reviews from The Philadelphia Inquirer’s Craig LaBan; Chef-Partner Eli Kulp and Pastry Chef Samantha Kincaid have been named among Food & Wine’s “Best New Chefs.” The restaurant has also accumulated a number of James Beard Award semi-finalist nods and nominations:  Baker Alex Bois was nominated for “Rising Star Chef, 2015 and 2016,” and Chef de Cuisine Jon Nodler was a semi-finalist in 2015; Fork was a semi-finalist for “Outstanding Restaurant” in both 2014 and 2015; and Chef de Cuisine John Patterson was named one of the nation’s top “Up and Coming” chefs by Imbibe & Inspire.

High Street on Market was named The Inquirer’s “Restaurant of the Year” in 2014, and Bon Appetit named it number two in the country in their annual “America’s Best New Restaurants” issue in 2014. Likewise, Travel + Leisure named High Street on Market one of the best new restaurants in the world in 2015. High Street on Hudson earned a covered “Two Stars” review from The New York Times’ Pete Wells, and the New York Post called it the best new restaurant of the year. Food & Wine included it among their 10 best of the year, as well. HSHG is widely acknowledged as among the country’s best, hardest working and most talented restaurant groups.

Yin is also the author of Forklore: Recipes and Tales from an American Bistro (Temple University Press, 2007), a thoughtful chronicle of her ongoing success at creating and maintaining a definitive American bistro in Philadelphia’s historic Old City. Yin debuted Fork in 1997, and has partnered with a number of dynamic chefs to keep the restaurant’s menu and concept fresh; since bringing Chef Kulp to Philadelphia in late 2012, she has expanded her smartly built family of restaurants to include more top locations and exciting talent. She is a graduate of the Wharton School of the University of Pennsylvania, and currently serves on the board of the Delaware River Waterfront Corporation, the Arden Theater Company and the Drexel University Hospitality Management Advisory Board.

A cash bar will be available during dinner.

Members plus one guest ticket price $20 (per person)

Members plus one guest ticket price $50 (per person)

Members plus one guest ticket price $70 (per person)